The Evolution of Email: A complete timeline

Email, or what once was called ‘Electronic mail’ has been around for decades, and it has grown to become one of the most cost-effective forms of marketing. Many people have predicted its death, time and time again, but it continues to evolve.

“You can’t kill email. It’s the cockroach of the Internet, and I mean that as a compliment. This resilience is a good thing.” (Source)

It has been 48 years since the first email was sent. That makes email much older than even the internet, and it has undergone quite a transformation. It is one of the longest standing creations in the marketing world and surpasses any other form of media you use today. But, where and how did it all begin?

The conceptualization of email

It all began with the idea of ‘time-sharing operating systems’, which was first introduced in 1959 by John McCarthy at MIT. It was believed that computers could someday handle multiple problems concurrently.

In November 1961, this became a reality with the demonstration of a Compatible Time-Sharing System (CTSS). It had one of the first inter-user messaging implementations and various users could log into one central system via remote terminals, and store and share files.

By 1965, CTSS had hundreds of users from different locations. They found a way to send each other messages by creating files with names like ‘To Bob’ and putting them in a public directory for the recipient to look at later.

The same year, Noel Morris and Tom Van Vleck wrote the ‘MAIL’ command for CTSS. Now, each message could be added to a local file with a private mode called the MAILBOX. They published the first source code and the CTSS manual of the MAIL command here.

The first internet, the first email, and other firsts

In 1969, four university computers were interconnected for the first time, and so ARPANET was born. This project was overseen by the US Defence Department’s Advanced Research Project Agency Network, and email transfers became a reality. Soon after, the world’s first-ever email was sent.

A computer engineer for MIT, Ray Tomlinson was working on a new system of sending messages between computers. In 1971, he initiated the use of the at-sign (@) to separate user names and machines. In the same year, he placed two computers next to each other and sent the first-ever email which put the wheel of electronic communication into motion. It said ‘QWERTYUIOP’.

Now that sending electronic mail became a possibility, we needed a way to organize them. Lawrence (Larry) Roberts wrote the first mail-manager software called RD in 1972. It made it possible to organize emails by subject and date, and people could read, save, and delete messages.

Consequently, email started trending. So much so, that in 1976, Queen Elizabeth II became the world’s first monarch to send an email. On the 26th March 1976, her email account was set up with the username HME2 (i.e., Her Majesty, Elizabeth II) and she sent this.

The concurrent invention of email marketing and spam

41 years back, on 3rd May 1978, the world’s first email marketing campaign was sent. What’s interesting is that it is also history’s first-ever email spam. The marketing manager of Digital Equipment Corporation (DEC), Gary Thuerk, sent the first unsolicited mass email for a commercial purpose. He sent this to 400 ARPANET users to promote a new DEC computer, which resulted in a sale of $13 million. If we take inflation into account, that’s equivalent to $52.6 million today.

But, most reactions were negative and complaints started pouring in immediately. A guy from the University of Utah said that when he got to work, he couldn’t use his computer because this spam had taken up all his company’s disk space. And so, Gary Thuerk, despite being a great innovator, started being called the father of spam.

The birth and growth of the Internet email

On 1st December 1989, Lotus notes email software (now IBM Notes) was released, and within the first year itself, 35000 copies were sold. Before this, emails were only available to students or employees, but the birth of the internet revolutionized how people used emails. Now everyone could create their free personal email addresses.

Meanwhile, email reached the space. An email was sent on 28th August 1991 by Astronauts Shannon Lucid and James C. Adamson to Earth from Space Shuttle Atlantis. They used an Apple Macintosh Portable computer and sent the first-ever email from space. It said –

“Hello, Earth! Greetings from the STS-43 Crew. This is the first AppleLink from space. Having a GREAT time, wish you were here,…send cryo and RCS! Hasta la vista, baby,…we’ll be back!”.

While emails were being sent from space, we still couldn’t attach things to it. It was about text-emails, until 1992 when the attachment was born. The Multipurpose internet email extensions (MIME) protocol was released, and now people could attach things. Nathaniel Borenstein and Ned Freed the attachment protocol, and Nathaniel sent the first-ever email attachment to his colleagues on 11th March 1992. MIME is still used for every attachment.

Other email platforms started swarming in

In 1996, with the third release of Internet Explorer, Microsoft also released the Internet Mail and News 1.0 (which we now know as Outlook). In the same year, Hotmail also started offering free email services. Now anybody could create a personal account and access emails from wherever they wanted to. By 1997, 10 million people had free accounts globally.

Email spam became such a problem, that in 1996 Dave Rand and Paul Vixie started keeping a tab on all IP addresses which had sent spam. This list was called the Real-time Blackhole List (or RBL). The demand for RBL increased. Soon, they created a Domain Name System (DNS) based distribution scheme, which made it possible for servers to block all unsolicited unwanted emails.

The email came to the nearest theaters

In 1998, the rom-com ‘You’ve Got Mail’ hit the theaters. Meg Ryan and Tom Hanks’s characters used the AOL software to connect. AOL was heavily involved in the making of this film. In fact, in the movie both the characters were using version 4.0 of AOL which was in beta testing mode during the making.

And presidential emails were sent to space

Bill Clinton responded to an email from outer space on 7th November 1998, via a Toshiba Satellite Pro Laptop. The message said: “Thanks for your message. Hillary and I had a great time at the launch. We are very proud of you and the entire crew, and a little jealous. We can’t wait for you to get home so we can have a first-hand report. Meanwhile back on earth, we’re having a lot of fun with your adventure. At a camp rally in Queens, I asked an 83-year-old lady what she thought of your trip. She replied that it seemed like a perfectly fine thing for a young man like you to do! I hope your last few hours go well. Give my best to the rest of the crew.“

The period of data protection, mobile phones, and better emails

Spam got so out of hand that by 1998 the data protection act was updated, and now all email marketing emails needed to include an opt-out. Meanwhile, HTML was introduced and emails became aesthetically better. Now we could add custom fonts, colors, graphics to our emails.

In 2002, Blackberry introduced its smartphone, which could send and receive emails and text messages. Now people could send emails on-the-go.

The CAN-SPAM act signed by President George W. Bush was put into effect in 2003. This created a standard that not only reduced spam but also mandated including sender details and unsubscription links in every email. Around the same year, Europe introduced the Privacy and Electronic communications regulations which defined rules for marketing permissions.

This honestly didn’t help as much, so the Sender policy framework was introduced in 2004. This framework was created to verify sender IP addresses, and thus prevent spam. AOL had also started to hand back recipient feedback, and Hotmail and Yahoo followed suit soon after. Suddenly, spam complaints became an important email metric.

Meanwhile, Gmail was born. After years of being used internally, Gmail was released to the public in 2004. As a matter of fact, it was announced on 1st April 2004, and everybody thought it was an April Fool’s prank. It obviously wasn’t. 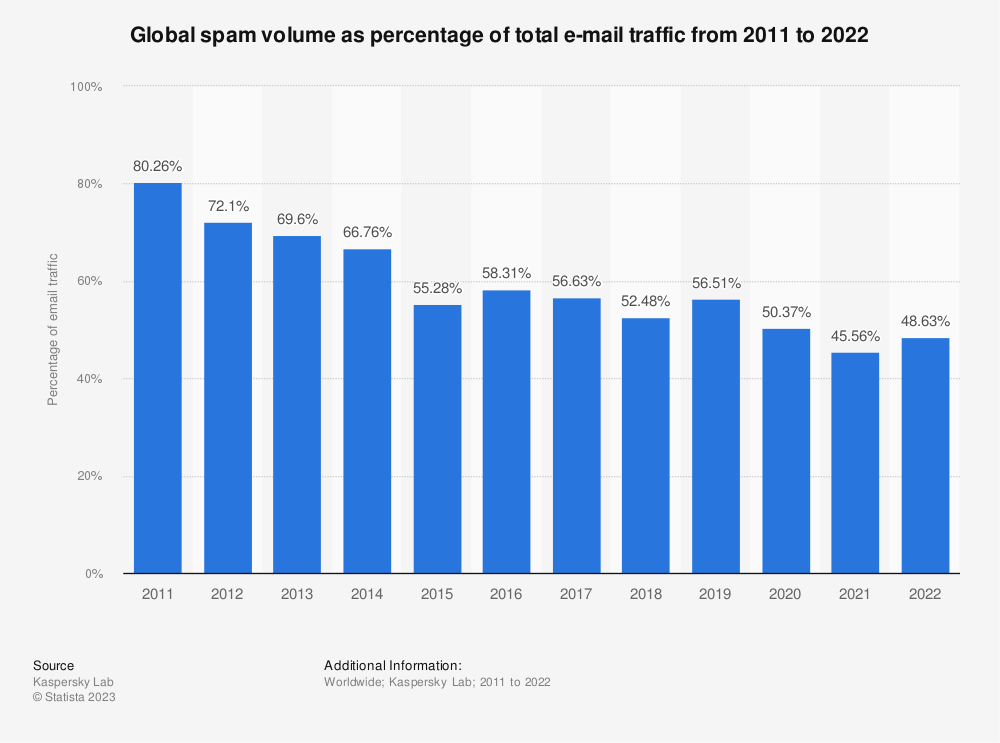 Unfortunately, spam still continued to grow. By 2008, 92.6% of total email traffic was spam.

With the increase in devices, responsive emails were introduced in 2009. This allowed marketers to send emails from one device to another. With more devices came more emails, and hence more chaos for recipients.

To de-clutter this chaos, in 2010, Hotmail and Google launched Sweep and Priority Inbox respectively. Emails would now be bundled based on their content, and marketers would now have to be much more strategic to make sure that the emails land in the recipient’s inbox.

By 2012, 40% of the marketer emails were being opened on smartphones, and so mobile-friendly emails were given a lot of importance. In the same year, DMA reported that 85% of all email marketers segmented their lists.

Marketers started realizing that they couldn’t continue to follow a one-size-fits-all approach for sending emails. Now that we had access to the recipients’ historical activity, personal information, and more, personalized emails were expected. As per a study by Infosys in 2014, 86% of consumers said that personalization has at least some impact on their purchase decision, and 25% said personalization significantly influenced their purchase. It was time to say goodbye to the old email blasts, and send dynamic content to make the entire experience substantially better.

Thanks to all the changes, by 2017 spam had come down to 39% from 92% in 2008. With spam being managed efficiently, came the General Data Protection Regulations (GDPR) Act on 25th May 2018 for the EU. Data was given the importance it deserved, and citizens were given control over their data.

Despite having been around for decades, emails have continued to evolve. We kept on building technology stacks on top of our emails to keep up with the advancement in the world, and email continues to be an integral part of daily communication. Many email marketing software has come up to enable better reach. It also plays a huge role in email deliverability.

Radicati released its Email Statistics Report for 2019-2013 according to which the total number of emails exchanged per day will exceed 293 billion within this year, and the number of worldwide email users will be over 3.9 billion. That’s more than half of the world population.

Yes, we receive an abnormal amount of emails daily, and it can get quite annoying. Marketers have been questioning the potential death of email for years, but despite the number of emails sent and received, email marketing is still as strong as ever. As per DMA’s report, the ROI for email marketing is £32.28 for every £1 spent. That indeed is better than most marketing channels that exist today. So here’s to hoping for many many more decades of ‘good’ emails and less spam.