Is the future of hiring blind?

Written by Aishwarya Hariharan on March 6, 2018

When a new member is added to a symphony orchestra, traditionally, they’re handpicked by the music director and the principal player of each section. For a long time, this led to rampant sexism and nepotism. Women were underrepresented in American and European orchestras for a number of charming reasons that included: female musicians having “smaller techniques”, being more temperamental and simply unsuitable for orchestras.

It wasn’t until the 1970s and 80s when symphony orchestras began to use blind auditions in their selection process that this situation began to change. In a blind audition, the applicant and the orchestra members are separated by a screen. This way, while the orchestra members can hear the musician play, they won’t be aware of their gender or skin color. This completely shook up the diversity stats and how! About 10 percent of orchestra members were female in 1970, compared to about 35 percent in the mid-1990s (Source: Princeton Weekly Bulletin).

In Yassmin Abdel-Magied’s TED talk (“What does my headscarf mean to you?”), she narrates a story about how the first set of blind auditions conducted by the Boston Symphony in 1952, yielded skewed results despite their intervention. The reason? Women wore high heeled shoes that produced distinctive clicks and gave their gender away. So, the orchestra had everyone remove their shoes before the audition. The second time around, almost 50% of the women made it past the audition round.

However, you don’t need to have attended the selection process of a symphony orchestra to be familiar with the idea of a blind audition. All you have to do is turn on the television; the reality singing show, The Voice, dramatizes blind auditions to match people’s expectations for reality tv. There’s no screen to separate the judges and the participants. Instead, the judges face the audience through the audition and are allowed to turn around only if they vote for the singer to be on their team.

The Voice isn’t just the entrance to a YouTube blackhole; it also holds the distinction of being one of the inspirations for Gapjumpers, a service that allows businesses to hold blind auditions for candidates. If you’re a business in need of an employee, you work with Gapjumpers to create and place a work sample assessment test on their platform. This way, you can decide if they had the skill set to be successful in the role without actually knowing anything about the candidate. Gapjumpers blinds everything from name, gender, educational institution, background and experience so that companies can make objective assessments, based on just the skill set of the individual. Their clients range from non-profits and startups to enterprise businesses like Dolby.

The best predictor of how someone will perform in a job is a work sample test (can explain 29 percent of an employee’s performance). This is ahead of unstructured interviews (14 percent), somewhat ahead of reference checks (7 percent of performance), years of work experience (3 percent), graphology or handwriting analysis (0.04 percent) and so on… Work Rules! by Lazlo Bock, former VP of People at Google.

In a world where 2.7% of jobs at leading tech companies in Sillicon Valley are held by African Americans and companies are padding their numbers to seem more diverse, a hiring process that combats biases is the need of the hour.  To learn more, we spoke to Anne Gregory, the Director of Customer Success. She works closely with clients and does everything from helping them write meaningful job descriptions to curating challenges for their open role and shortlist candidates. She also handles any questions that applicants might have and any issues that might arise from their use of the Gapjumpers platform.

Most companies collect applicants by putting up a career site and posting jobs onto it. Sometimes, they post ads on job boards to attract candidates. Sometimes, they share these jobs on social media. When a candidate applies, their application is vetted by a recruiter or the hiring team, depending on the process.

If you’re a Gapjumpers client, this is where the path diverges. When a candidate applies, they receive a challenge invite. Anne works with clients to identify requirements and develop challenges that are unique and specific to the job role – challenges that you can’t crack with a bit of Googling. Once all the submissions are in, they’re ranked using a Gapjumpers algorithm; Anne then works with hiring managers to shortlist candidates based on their results. Only then are the candidate profiles revealed to hiring managers.

Unsurprisingly, whether it’s a enterprise business or a startup with six people in a room, Anne revealed, the hiring biases remain the same. While businesses want to better their diversity numbers in theory, they very rarely make the effort to do so. Most hiring managers and recruiters have usually distilled down what they’re looking for in a candidate to a very short list of ideal markers. This could be anything from a certain kind of educational experience or educational institution or background or experience or personality traits, which ends up limiting the talent pool to a small group of people. These filters might be conscious or unconscious – what matters is that they are porous enough to allow talented candidates to slip through.

Everybody has the same intention: Find a very talented person who has the skill set necessary to be successful in the role and is a good fit for the company’s culture. The trouble is that every person’s idea of a good fit is different. What Gapjumpers wants all of their clients to do is to widen their talent pool and take a look at non-traditional candidates who wouldn’t typically make it onto the radar for any number of reasons. Sometimes, they’re caregivers that are on-ramping and off-ramping their careers. Sometimes, they have out-of-the-box work experiences that don’t immediately appeal to the hiring manager. Gapjumpers aims to show clients that you don’t have to lower the quality bar to make your workforce more diverse.

Step 1: Do you need blind auditions?

The answer is almost always ‘yes’ but humor the skeptics and analyse your historical hiring data to figure out what your typical applicant looks like. In recent times, there’s been a lot of discussion, especially in the tech space, about the leaky pipeline problem. According to some people, there’s not enough diversity in tech because there are not enough diverse, qualified applicants.

A USA Today study in 2014 showed that top universities graduate black and Hispanic computer science and computer engineering students at twice the rate that leading technology companies hire them. Yet, companies state there aren’t enough diverse, qualified applicants in their pipeline.

Gapjumpers also discovered that, though clients complained of a leaky pipeline, their data showed that this wasn’t always the case. There are usually drop offs in the screening process for any number of reasons and a lot of this ties back to the use of resumes in the hiring process. Leveling the playing field with these blind auditions that allow applicants to put their skills first before any well-written description of their experience helps mitigate the drop offs.

Pilot for a couple of roles to show the kind of magic a blind audition can work.

For most of Gapjumper’s clients, the jumps are pretty impressive. Anne disclosed that, typically about 60% more women and upto 40% more diverse candidates make it through interviews.

But what if the issue really is that the business isn’t attracting a big enough candidate pool or the right kind of candidate?

Like for love, maybe you’re looking for candidates in all the wrong places. Gapjumpers also helps companies source candidates through job boards and tie-ups they have with educational institutions and coding bootcamps.

Coding bootcamps in particular have been a good source for Gapjumpers because secondary education has changed both in the US and globally. It has become such an expensive prospect to receive an education in a four-year-college so a lot of people are finding alternative paths to careers and that includes coding bootcamps. Self-taught individuals are increasingly using these massive online courses to educate themselves and make a lateral move in their career.

Finding the right one

If you’re attracting everyone but the right type of candidate, perhaps the issue lies with your job description or the interviewers, themselves.

The first problem can be solved with objectivity and a good content writer. Anne usually points her clients to Textio. Textio uses natural language processing to actively help with writing – whether it’s a job description or an email or even this article (Feminine tone and asks too many questions).

Textio scans your document and points out the obvious impressions that some of your words/phrases provide. Are they more appealing to men or women? Does this phrase sound formal and like something a corporate would say? This really helps you be mindful of your language choices. The idea, Anne explained, is to get hiring managers to focus on the objective skill based reasons a business want to hire somebody and stay away from the more subjective, personality based traits. This includes what people like to refer to as a cultural fit. If you’re making decisions based on subjective, personality traits this early into the hiring process, then you can depend on your hiring process to be biased and non-inclusive.

As for the interviewers, perhaps, the issue is that they let their biases play into their perceptions. So the questions, you really need to be asking yourself are: Does the hiring panel reflect the kind of diversity you’d like to see on your team? Is there real representation or is it just one decision maker calling all the shots? Are your interviews consistent? Are you asking the same questions to every candidate in the same manner? Are they asked by the same people?

Blind auditions also have the advantage of giving you the opportunity to offer proper feedback on applications, instead of just vague platitudes and perceptions. Not only does your pipeline get larger and more diverse but your applicants also have a good hiring experience.

In the future, Anne hopes to see applications like Gapjumpers make strides into the world of performance reviews and succession management. After all, if you go to great efforts to hire great candidates, you should also focus on keeping them on your team, happy and engaged. People are the number one asset in the organization and being able to keep them successfully once you’ve attracted them should be the number one goal of any company.

As tech makes huge strides in saving lives and time that would have otherwise been spent deciding I should reply with a “haha” when a friend says “haha”, it’s taking its time trickling down to the HR industry. Hiring still continues to be something of a leap of faith – you use challenges to shortlist candidates, collect structured interview feedback and then assess someone subjectively to find out if they’re a culture fit. We try to course correct the subjectivity we employ in the hiring process through diversity training and bias training.

There has been some criticism and skepticism about unconscious bias training: information often found in diversity trainings — isn’t helpful and can even condone the use of stereotypes. Google’s unconscious bias training program came under fire last year, because of James Damore and the controversial memo. Of course, not all training programs fall into this category and it’s better that we be aware of our subjectivity and continue to work on making sure we’re becoming more and more objective…but perhaps until that golden future when we can all switch off our emotions and approach every hire with rationalism, blind auditions are the way to go. 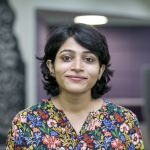 Content baby. Eats books for breakfast. Forever stuck trying to come up with a good analogy.